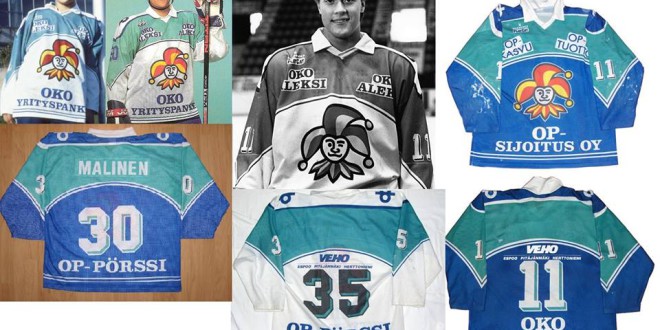 How to spot a Jokerit gamer? (work in progress) 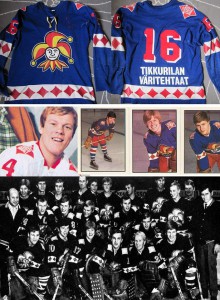 Blue and white jerseys. Tikkurila adds on shoulders, Tikkurila pattern on sleeve and hem stripes. Some possible variations on adds below back numbers 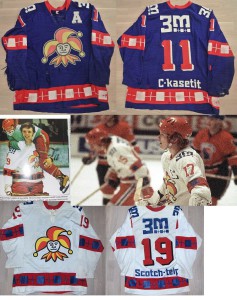 Blue and white jerseys. 3M adds on shoulders and on back above the numbers. Scotch tape pattern on sleeve and hem stripes. Variations in advertisement texts below the back numbers. 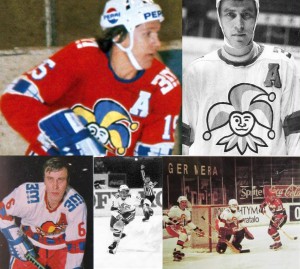 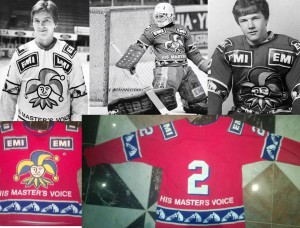 Red and white jerseys. EMI as main sponsor with adds on left and right chest and on both shoulders. His Master Voice on front and back with pattern on sleeve and hem stripes 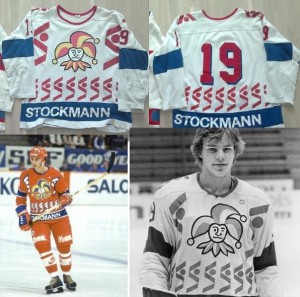 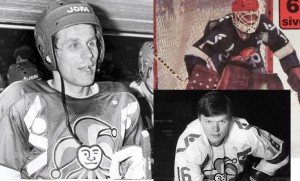 Blue and white jerseys. Similar style as worn during previous two seasons. Red jersey replaced by blue. Notable difference is that material of jerseys switch to Airknit type of material. 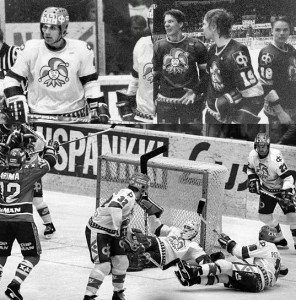 Introduction of “Flying J” Logo. Blue and white jerseys. Big Seura Adds. Some variety of other sponsors in front and back of the jerseys. Stockmann, Puolimatka, E-Öljyt, Fujifilm etc. 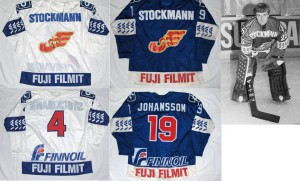 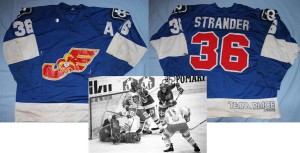 Blue and white jerseys. Unfortunately very little material available from these seasons. I assume that this same style and almost indentical jersey were worn during those two seasons. Style is same than one year prior. Only with fewer adds. OKO Pankki patches on shoulders. Team Place add on back hem (Jerseys still manufactured by Kisapuku OY, Team Place probably did the customization back then)

Blue and white jerseys. Same style as two seasons prior. Main difference is big Lancia add on front of the jersey. 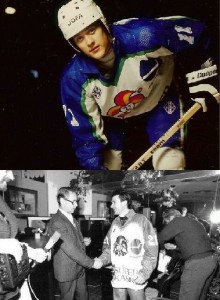 blue/green and blue/white jerseys. Back to original logo. All sublimated jerseys with sewn on namplates. Finair as sponsor. Made by Tackla.

Green/blue and green/white jerseys. All sublimated, sewn on nameplates. Two seasons that are very difficult to tell apart from each other. Variety of chest adds. OP Kasvu, OKO Aleksi. Variety of different front and back hem adds.

Also some variations of number styles (solid shadow boxes or transparent) Based on my research main difference is that 90-91 jerseys have Veho add above the back numbers. This doesn’t seem to appear in 89-90. 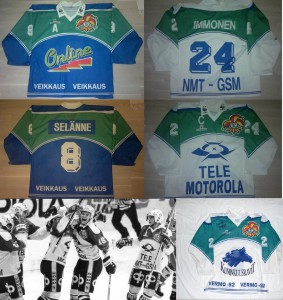 Green/blue and green/white jerseys. All sublimated, except some of the jerseys from early part of the season have sewn/glued on captain letters. 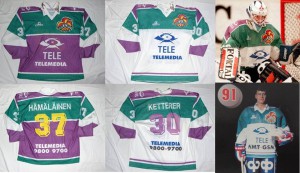 Green/purple and Green/white jerseys. All sublimated. Some sewn/glued captain letters. Variety of different main sponsors. Most players had several sets. 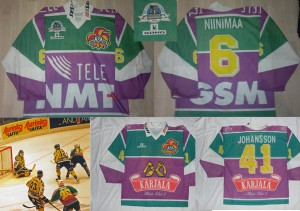 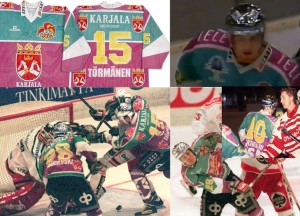 Notable difference from previous year. Name is placed under the number instead of above. Jerseys with NMT sponsors have back numbers and name higher than those with Karjala adds. 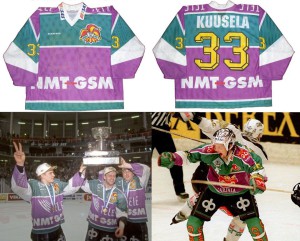 Name on the back again above the numbers. Most notable difference to previous seasons: black outlines on numbers. 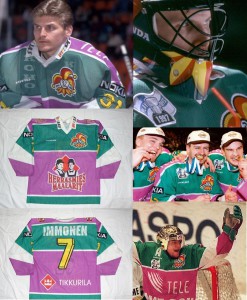 Most notable difference to previous season: Nokia patches on sleeves. 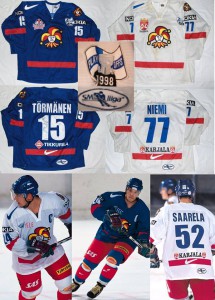 Blue and white jerseys. Nike stepped in as a manufacturer, presenting more pro quality shirts with fight straps. New feature for the whole league was SM-Liiga patch sewn on back hem.

There was variety of main sponsors, Veikkaus, Tele, Karjala, Tikkurila, but only one set of jerseys per player. 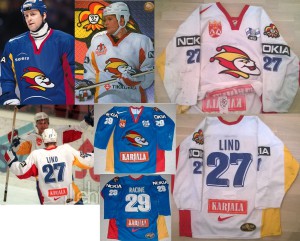 One set of jerseys per player. Large Nike designed logo on front and small traditional Jokerit logo on shoulder. SM-Liiga patch sewn on back hem. Colors of the patch changed to blue background with copper outlines and details. 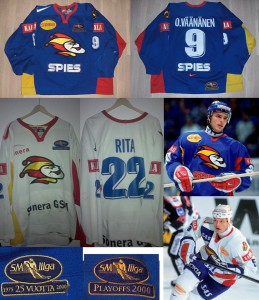 Blue and white jerseys with yellow and red stripes on sides. Nike jerseys similar to ones worn previous season. Biggest difference is Karjala patches on sleeves instead of Nokia. Of course SM-Liiga anniversay patch is dead give away.

One set of jerseys per player. Mid way through the season some of the adds were changed by covering up the old ones. At least ones with SPIES and Sonera as main sponsor went through the change. 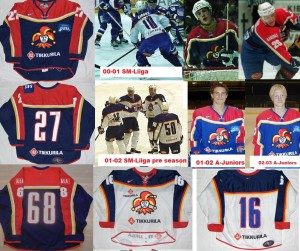 Blue and white Nike jerseys, one set per player. Sewn on back numbers, screened on sleeve numbers names sublimated on the name plate. SM-Liiga patch on back hem, SM-Liiga Play-Offs patch on front chest.

Names removed after the season and jerseys used again in SM-Liiga 01-02 pre season games with out names. After that jerseys were further recycled to A-Juniors (U20 team).

Note: When used in juniors, Play-Offs patches were not removed but covered with sewn on Jaffa add. Original PO patch can be found beneath. 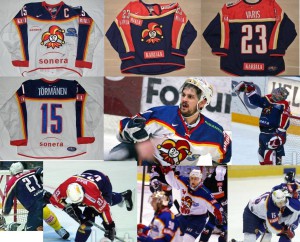 Blue and white Nike jerseys, one set per player. Same style as year before. Notable differences: also sleeve numbers were sewn on.

Karjala patces below the numbers. Names sublimated to the nameplate. SM-Liiga patch on back hem and SM-Liiga PO patch on front chest.

Note: blue jerseys were kept by players after the final game 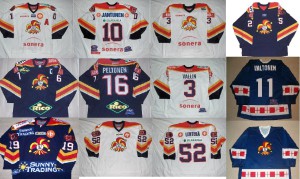 As the jerseys worn from 02-03 through 07-08 are pretty identical, I will not list each of those seasons separately.

I have listed some of the key points from the each season that should help out to identify the season of particular shirt. Note that there are of course exceptions and Jokerit did some recycling and time to time you may run into “hybrids”.

In example jersey with 02-03 manufacturer logo, but 04-05 sleeve patches. So details listed below are not set in stone but one could assume they apply on every 9 out of 10 shirts.

CCM Logo on back below the collar. Karjala patches on sleeves. Small harvest patch on right shoulder.

CCM Logo on back below the collar. ED patches on sleeves (note: different shape than season before). Small harvest patch on front and center. SM-Liiga regular season patch on right side of back hem, Play-Offs patch on left.

For 04-05 SM-Liiga also had these special anniversary jerseys made for each team to celebrate 30th season. Jerseys were modeled after first jerseys each team wore during their first SM-Liiga season. Shirts were low quality replica type jerseys with sublimated logos and details and name+plus screened on back. Also sewn on SM-Liiga patch on back hem.

Each team wore these jerseys in opening periods of selected games. For Jokerit it was two games: 06.02. Kärpät-Jokerit & 22.02. Jokerit-Ässät

Reebok logo on back below the collar. Ed patches on sleeves. New style SM-Liiga (blue and white) on back hem.

Reebok logo on back below the collard. Ed paches on sleeves. basically identical to jersey worn previous season.

Key differences (may not apply on all jerseys). Small ISOVER patch on front and center below the collar. Large SUNNY TRADING adds started to appear on many players. SM-Liiga liiga patch on back right, Play-Offs patch on back left.

Reebok logo on back below the collard. Ed patches on sleeves. Very much same as previous two seasons. 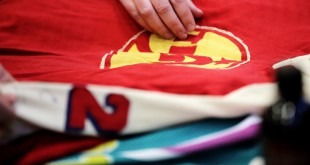 Great trip for the team but good to be back home!

I’m always looking to buy Jokerit jerseys. Let me know if you have any!

Jerseys available can be found under the FOR SALE -tab at the top menu.